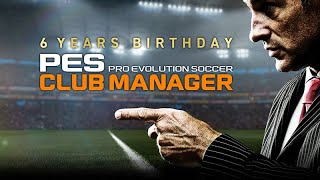 PES CLUB MANAGER is a unique entry in the Pro Evolution Soccer series that will test your tactical nous and your managerial skill like no other football game available. Join over 40 million managers around the globe and see if you've got what it takes to lead your club to glory.

Please contact us from an inquiry form in game in order to provide a prompt response.

Please note that customer support is available in English only.
Thank you very much for playing PES CLUB MANAGER.

IMPORTANT: Changes to the Compatible Devices by the Engine Update
The list of compatible devices will be changed to the following once the update concludes in 18/9:

Customer support will not to be assisting in cases where the application doesn't run properly on an incompatible device.
Please consider changing your device or upgrading it's operating system if you encounter this issue.

*Please DO NOT FORGET to take note of the required information located at "Data Migration" under the "Setting" menu before you change your device.

adidas, the 3-Bars logo, the 3-Stripe trade mark and Climacool are registered trade marks of the adidas Group, used with permission. The use of images and names of the football players in this game is under license from FIFPro Commercial Enterprises BV. © 2021, DFB. Official Licensed Product of Deutscher Fußball-Bund produced by Konami Digital Entertainment. © The Football Association Ltd 2021 Copyright FFF © Official Licensee of the FIGC The FIGC logo is a registered trade mark of the Federazione Italiana Giuoco Calcio ALL RIGHTS RESERVED BY JFA &copyJ.LEAGUE Official Licensed Product of the RFEF Officially Licensed by Eredivisie C.V. and Stichting CAO voor Contractspelers ™ © 2021 THE ARSENAL FOOTBALL CLUB PLC. ALL RIGHTS RESERVED Official product manufactured and distributed by KONAMI under licence granted by A.S. Roma S.p.A and Soccer s.a.s. di Brand Management S.r.l. © S.L.B. Producto Oficial. Official Videogame(s) of CORINTHIANS © Manchester United Football Club Limited 2021 All rights reserved All other copyrights or trademarks are the property of their respective owners and are used under license.